There’s a lot of outrage, but most of it is sensationalized click-bait. 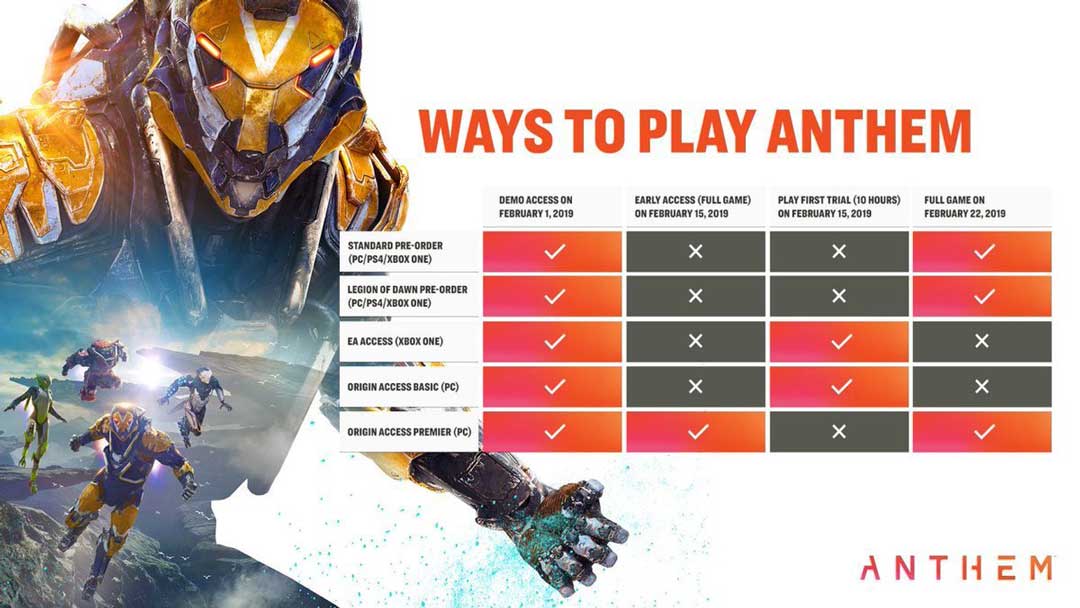 Let’s break down what the Anthem release schedule says before we get too angry and break out the pitchforks and torches.

On February 1st, everyone who preordered Anthem, or is subscribed to one of the various levels of EA membership, gets access to the demo. This includes EA Access on Xbox One and both levels of Origin Access ($4.99/mo and $14.99/mo respectively) on PC. The demo runs until Sunday, February 3rd and then that’s that.

On February 15th, Origin Access Premier subscribers get early access to the full game. This is what’s getting a lot of people riled up, but we’ll get into that more in a second…

Also on February 15th, EA Access subs on Xbox One and Origin Access Basic subs on PC get 10 hours of access to the full game. To me, this seems like a marketing ploy to entice people to spend more money. Not great and I can definitely see why this might get some people angry.

Then on February 22nd the game releases and those with the $14.99 Origin Access Premier subscription retain access. Those who preordered without any subscription finally get to play more than the demo. Meanwhile, EA Access and Origin Access basic subscribers are left behind. You can guarantee that if an “EA Access Premier” existed on Xbox One, they would also retain access.

So, on the whole, Anthem releases on February 22nd like it was always scheduled to and some people get 7-days of early access based on spending more money… But, it’s really only more money if you preordered Anthem in the first place.

In my opinion, preordering games is a bad idea; I don’t do it and I would strongly recommend that you don’t either. But, I can’t deny that EA Access on Xbox One and even the basic level of Origin Access are pretty good deals, depending on how you use them. Check out the list of games and decide for yourself, don’t take my word for it.

When I was done, I canceled the sub with no shame. There was actually a slight feeling of pride and accomplishment as I basically screwed EA out of roughly $50 in revenue by paying $10 to play $60 worth of games I won’t consider picking up again for the next 5 years if ever. Again, that was $10 over 2 months and I even threw in a playthrough of Bad Company 2 which is also included in the same subscription tier.

If you think about it, Origin Access Premier could be a good deal in a similar way, depending on how you use it… So, let’s talk about that.

I’m a big fan of getting even instead of getting angry. When a big company tries to step on you, you have to find a way to get even.

With that in mind, if you really, really think about it… You could use Origin Access Premier to play Anthem for $15 and probably finish all of the content at the same time. When you’re done, cancel the subscription.  I’d be lying if I said spending $90 was better than spending $15 – oh, right, you get access to the “Deluxe Edition” that’s probably all filler content anyway.

There are 2 subscription durations for Origin Access Premier, monthly ($14.99/mo) and yearly ($99/yr). If you opt for monthly, you can cancel whenever you want. Yearly saves you some money in the long run, but if you’re only using it for 1-2 months then there’s really no point.

A lot of people will say “wait for a sale”, well, $15 is a pretty good sale and chances of seeing Anthem retail for that price anytime soon is slim to none. Even if it takes you 2-months to wrap the game, you’d still only spend 1/3 of the full-price value. Plus, who wants to play an online game after most of the player-base has faded away?

HOWEVER… Whether or not it’s even a good game, is up to you. By no means am I saying “just buy it”. No, definitely not.

What I’m saying is, if you wanted to play Anthem anyways and you were already thinking of buying it… Maybe spending $15 is better than $60-$90? Even if you played it for 2 months, you’re still only spending 33%-50% of the retail value.

Or, what if you get bored after a week or two of playing? $15 is a better loss than $60-$90 the way I see it. It’s not like you can sell a digital copy of a game that’s been activated, so there’s really no way to recuperate your money either way. Might as well go the cheaper route!

The only time this release schedule really becomes an issue, is when you’ve already preordered the game. Then you’re basically getting screwed out of early access by people who only paid $15. Yeah, that’s unfair and I 100% agree… But, don’t preorder games. If people stopped preordering games altogether, these types of staggered release schedules would vanish almost instantly.

Either way, I hope you were able to gain something from this. Hopefully, it offered some relatively unbiased objectivity on a situation that’s been blown way out of proportion.