Creative's Sound BlasterX H7 is a headset that not only sounds great but looks great too, it might even be the nicest headset that I've had a chance to review so far!  It offers quite a few improvements over the H5 model that definitely make it a headset worth considering, regardless if you're a console or PC gamer.

Incredible sound quality, a great mic, loads of versatility, and top-level comfort are all things you get with the H7 gaming headset.

Creative's Sound BlasterX H7 gaming headset offers top-notch quality for an awesome price. It's definitely a headset to consider if you're in the market for a high quality audio experience and tons of comfort, regardless if you're a PC or console gamer.

After having the chance to review Creative's Sound BlasterX H5 gaming headset not too long ago, I was also sent the H7 to put to the test - and wow, I'm impressed. Not only does the H7 offer better-unamplified sound quality than the H5, but it's significantly more versatile by adding the option to use either a USB connection or a single (instead of dual) 3.5mm jack. This means you can easily use the H7 on your console controller without needing any auxiliary sound card to actually use the mic. Using the USB connection also allows you to take advantage of the built-in 24bit, 96Khz DAC, which really improves the sound quality over the standard 3.5mm 4-pole jack.

The comfort level is a step above what the H5 could offer, which is saying something because the H5 is an extremely comfortable headset. I'm not sure how they did it, but the memory foam seems more cushiony and the leatherette feels softer, on the earcups at least - the headband feels pretty much the same.

I'm a huge fan of the overall design that the H5 and H7 headsets share, and in my opinion, they're some of the best-looking units you can get. The lightweight metal frame allows for lots of flex and tons of durability while simply looking great. The H7 is definitely one of those headsets you can put on and forget that you're still wearing it 6-7 hours later, it's that comfortable & lightweight.

Performance-wise, the H7 is far superior to the H5 in terms of sound-quality, the mics are seemingly identical however. Although, sharing the same mic is definitely not a downside because it's a really great mic - contrary to the images the mic does come with a foam windscreen. I'll get more into exactly how good the H7 perform deeper into this review, but know for now that they are incredible!

Something else you should know about is Creative's BlasterX Acoustic Engine. It's a bit of software that'll allow you to further customize your experience by allowing you to set up custom profiles with different EQ settings for various scenarios.  Honestly, without using this software you're not going to enjoy the H7 as much as you would otherwise - it really helps to run the proper profile for whatever you're doing. For more advanced users you should be able to setup some pretty clean custom EQ profiles that'll beat the default options. It also comes with a voice changer that's kind of fun to use for messing around. 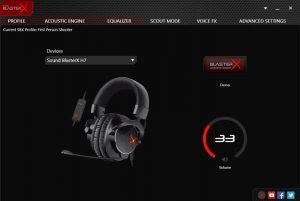 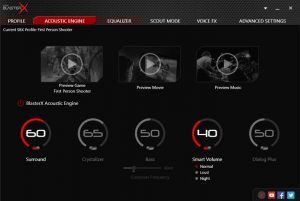 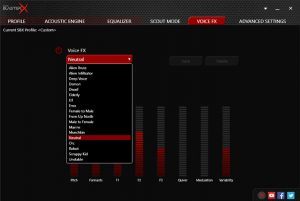 Personally, I'm a big fan of minimalistic designs that aren't too flashy, and the H7 delivers on that well. The overall look is super appealing if you share similar tastes as I do.

The earcups are a nice balanced size without being excessively big or too small and they create a near-perfect seal around your ears (my ears at least). The arms/frame is made from a lightweight metal that's finished with a brushed steel look that really adds a nice touch to the overall look of the headset, but I'm also a huge fan of brushed / machined metal aesthetics. 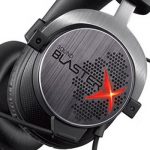 Usually, I'm not the biggest fan of unnecessary LEDs, and the H7 does have some LED accenting on the earcups, but I feel that it was pulled off really well and it's definitely not offensive. Also, the LEDs will only light up if the headset is connected via USB, so if you're planning on using the 3.5mm jack then you won't have any LEDs. You can also tweak the LED settings via the BlasterX Acoustic Engine in a few different ways, although they're only single color (red).

One rather prominent downside is the fact that the cord doesn't detach from the earcup, which could prove to be an issue down the road if it needed to be replaced eventually. But, with that said, the cord is thick, high-quality and braided, so I don't think you'll run into too many issues anyway, not without trying. The in-line remote is also kind of big, but it's also handling a lot more than most of the in-line remotes you'll see out there, so it's understandable why it would be larger.

Now, for the most important section, the performance. I don't really know where to begin, I put the H7 through a battery of tests that would be more suited for a high-end pair of audiophile cans, and I came out of it extremely impressed. Overall, the H7 offers absolutely incredible sound quality through both connections, they have a very vibrant feel with seemingly heavier lows. 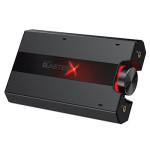 It doesn't really matter what you're using them for, the H7 just plain performs well. In FPS games where an accurate soundstage is a must, or when you're using TS to coordinate a raid, you'll be happy that you're using this headset, seriously. When you hook it up to an amp is when you'll really say "wow", running the H7 through Creative's G5 DAC/amp is like putting on a completely different headset, and it really starts to perform like a higher-end set of audiophile headphones.

The mic is decent and I really can't find anything to really complain about here. It sounds almost as good as the ModMic 4.0 does and it's fully-detachable which is a nice feature for when you just want to kick back & listen to some music. The plug is located in a convenient enough area, and it's depressed in such a way that you should be able to easily plug the mic in without actually having to take the headset off.

One thing to note, but not something I've experienced, is that a fair amount of people have written reviews stating that the H7 doesn't work too well when running through a PS4 controller. Using it with my Xbox One controller to play Dirt: Rally worked out pretty well, not as good as directly through my PC or an external DAC/amp, but it definitely wasn't as bad as people have reported with the PS4 controller.

All-in-all, Creative really hit the nail on the head with their Sound BlasterX H7 gaming headset. It's a top-notch unit offering a level of sound-quality that you would expect from a high-end pair of audiophile cans. The mic has no major flaws and the overall construction of the H7 definitely seems durable enough to last a long time. One thing that's a little annoying is the in-line controller's size and weight due to the integrated DAC, which is understandable and it's actually a good thing, but it tends to sit awkwardly at times / flop around a lot.

After using the HyperX Cloud II for a few months, then testing the Sound BlasterX H5 and now the H7, I have to say that the H7 is definitely the nicest gaming headset I've had the chance to use at the time of writing this review. From amazing sound quality to an insane amount of comfort and everything in between, this is the headset you're looking for. 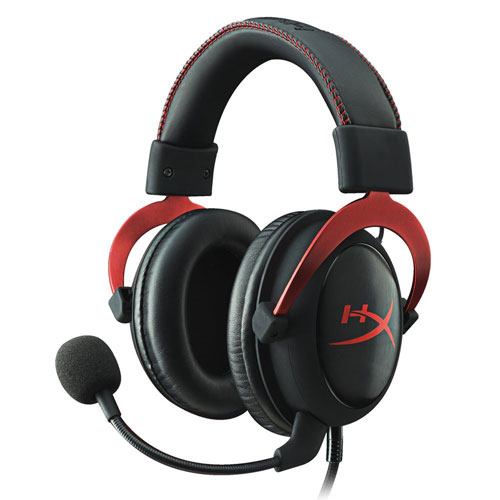 Good headphones, loved them. The non-swiveling earcups is the only problem I find here. But detachable mic feature is something that’s unique.

I’d have to agree, the BlasterX H7 is an awesome headset but swiveling earcups would have made them just that much better 🙂 I find that detachable mics make watching movies / listening to music more comfortable for sure, definitely a nice feature to see on a headset like the H7!