The DIERYA DK63 is an affordable wireless mechanical keyboard. This is a very compact keyboard that comes with a 1900 mAh battery which can last up to ONE HUNDRED (100) hours of gameplay before it has to be charged. This keyboard can connect simultaneously to three Bluetooth devices which you can instantly switch (like a KVM) between by pressing FN and Z, X, or C. It has a Bluetooth range of 10m, so you can comfortably use it on a sofa or bed without any problems! You can charge and/or connect this keyboard to your PC through the USB-C to USB-A cable provided in the box. It has tasteful RGB lighting with 7 different lighting modes at multiple levels of brightness.

In the box you get:

This keyboard comes in two different colors – black and white. It also comes with 1 year warranty which is nice to see included with lower cost boards. When you purchase this keyboard, you can also choose your switch type:

More on these switches later.

You can also download a piece of software from DIERYA which will give you a better RGB experience with 19 different modes. This software also allows you to create macro keys. You can get that software here. 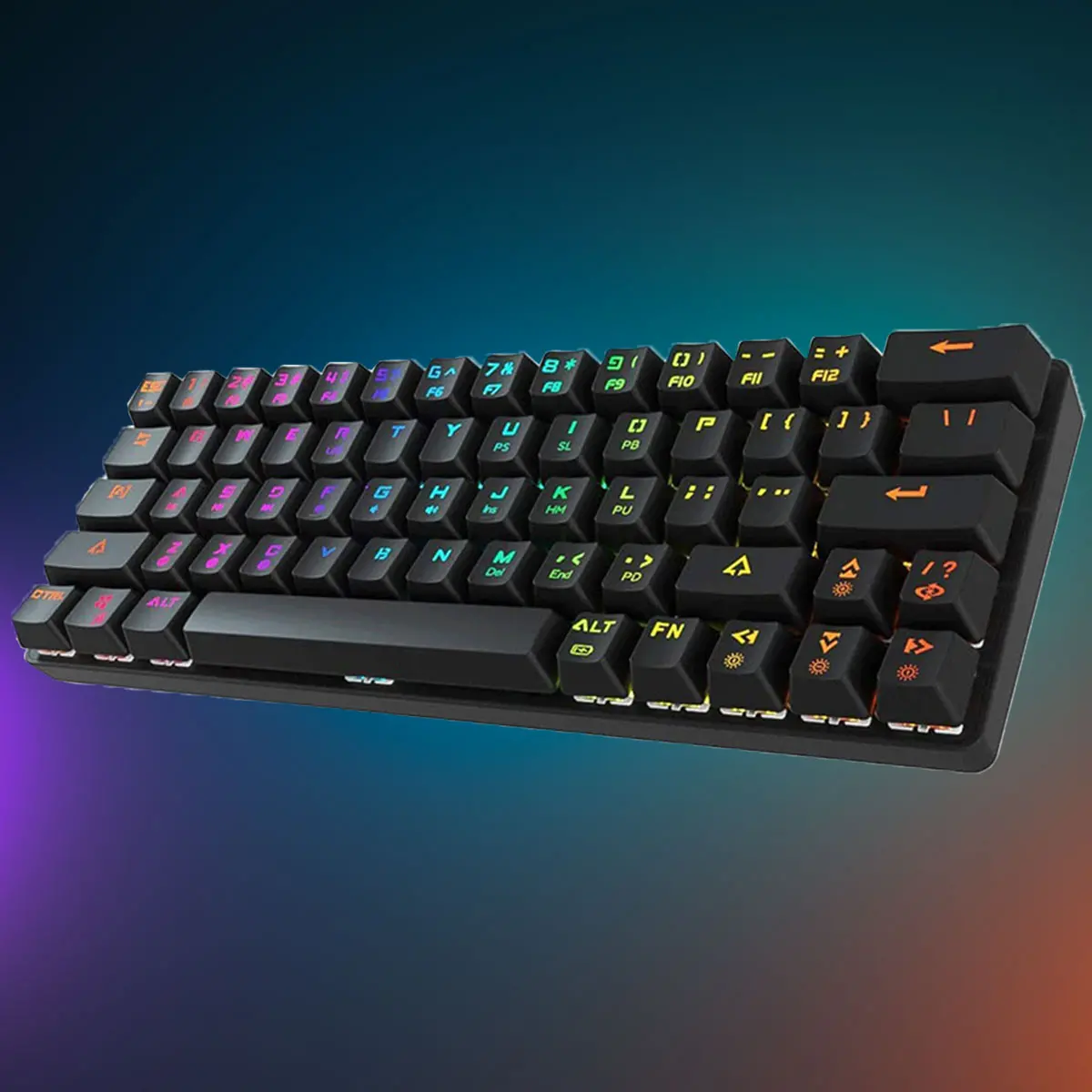 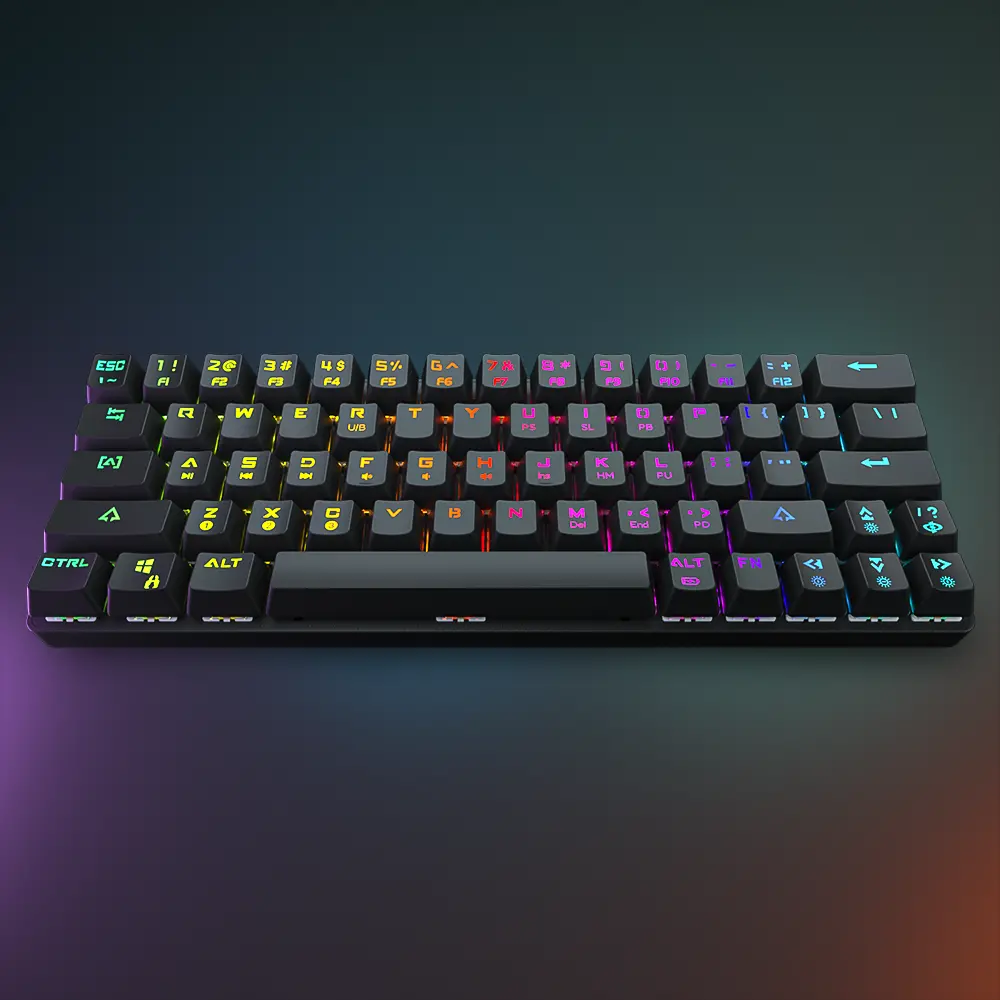 This keyboard is designed for the gamer. It is small and compact with its 60% layout, but if you type a lot, you might not like this keyboard because of its unique layout. It comes with a mostly ANSI layout (they layout you would find on most keyboards) but DIERYA added in the arrow keys, which messed up the arrangement of the right side of the keyboard as you can see if you look closely at the pictures above. If you type from muscle memory like I do, you will find this layout annoying because you must relearn the position of certain keys.

The keyboard is also not hot swappable, so if you do want to change out a switch that is broken, there will be some soldering involved.

This keyboard has ergonomically designed keycaps for long-term gaming and typing comfort. They match the curve of your fingers which will reduce fatigue during long sessions. The keycaps are made from ABS plastic which makes them high-quality and durable. This keyboard also has foldable feet which allows your hands a more natural position while gaming or typing.

I have not really had any performance problems with this keyboard, except that the comma key tends to start ghosting every few clicks which means that the keypress doesn’t register every time that it is pressed. This seems to get progressively worse the most I use the keyboard. If you’re mostly using this keyboard for gaming that this wouldn’t really be a problem for you, but if you both type and game like me this does get annoying.

At checkout you can choose what kind of switches you want with this keyboard. Here is a quick run though of all the switch options included with this board.

The Black switch is a linear switch with 60 grams of activation force and lifecycle of 50 million keystrokes. A linear switch means that you do not feel a bump when you press down the key. This switch is a good option if you’re gaming more than typing, because linear switches tend to be better for gaming because it doesn’t have a bump when your press down on a key like you would have on a tactile switch. But note that this switch does have a heavier actuation force which not all users like.

The Blue switch is a tactile clicky switch with a 50-gram activation force and a lifecycle of 50 million keypresses. A tactile switch means that you will feel a slight bump as you press down on the key. This is also a clicky switch which means that the sound coming from each keypress is fairly loud. This switch would not be great is your planning on streaming, because your keypresses will be clearly heard which can be annoying to your audience. I find that it is not the greatest for gaming because its tactile, clicky, and has a heavy activation force. I personally just find the keys to hard to press when you’re in an intense game.

The Brown Switch is my personal favorite, it is a lighter tactile switch with a 45-gram activation force and a lifecycle of 50 million keypresses. Like I mentioned above, a tactile switch means that you will feel a slight bump as you press down on the key. This switch is not too loud, and it is does not have a heavy activation force which is nice for gaming.  I find these the best middle ground between typing and gaming, which I do a lot of both!

The Red switch is a linear switch with a 45-gram activation force and a lifecycle of 50 million keypresses. As I said above a linear switch means that you do not feel a bump when you press down the key. This is a great switch for gaming, because its linear and it has a light activation force. I find these a little light for typing, but other than that they are a good all-around switch.

Overall, the DIERYA DK63 is a small and compact wireless keyboard with lots of features. The only things that I don’t like about it is the weird 60% layout and the ghosting on the comma key on my board. These are all just things that matter if you type a lot but if you’re going to use this keyboard for gaming, being only $70 USD I would highly recommend it, but remember, there is that problem of ghosting that seems to get worse over time!

Check out the DIERYA DK63 keyboard!
Check out DIERYA's website!

Check out OTHER DIERYA PRODUCTS ON AMAZON