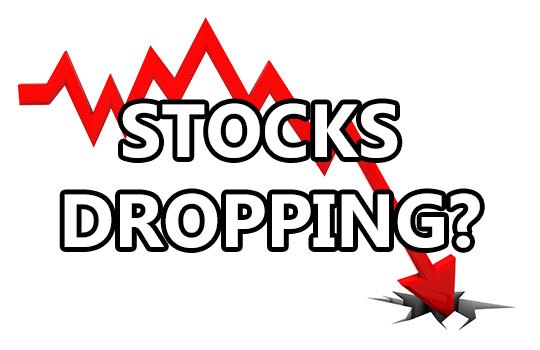 I’m not a financial advisor and I’m not an economist, everything herein is effectively speculation backed up by charts. Similar to the speculation you’ll see ALL OVER YouTube from content creators regarding specific companies and their share values dropping.

With that out of the way…

Why is it that companies like EA, Ubisoft, Activision, CDPR, Take Two, and pretty much every other big games company have seen their share values drop?

Is it that these companies have damaged their reputations in the eyes of consumers and investors? Well, in some cases, that could be seen as a possibility… But, not in the case of companies like CDPR who are widely considered one of the best games companies of our time.

Contrary to what all of the most popular “TechTubers” have been telling you, these drops in share value are not company specific, nor are they caused by poor releases and bad press. Quite the opposite actually, what you’ve been shown is only a fraction of a much larger issue.

Again, I’m not an economist, I’m not a financial advisor, I’m just a guy who does a lot of research.

Based on said research, one can see that these drops are very widespread and relative to one another. All it takes is a Google search of a tech company followed by “share price” or “stocks”. So, “CDPR stocks” would bring up a chart similar to what you’ll see below (updated: 12/27/2018). Doing that, you’ll notice that most companies have seen anywhere from a 20-50% loss from Oct 1/3 until now. 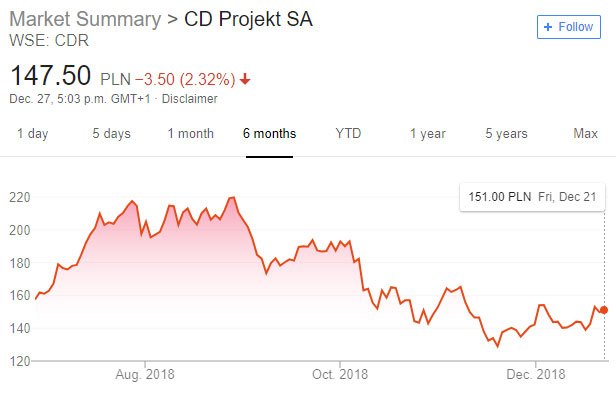 If you do that for basically every and any company you can think of, you’ll start to notice a trend. They’ve all started to see significant losses starting between Oct 1 – Oct 3. Even those giants you might think were untouchable. A good example would be Take-Two who happens to be the parent company of Rockstar Games (as well as 2K). You know, that small indie studio that just released arguably the biggest multi-award winning AAA game of 2018? 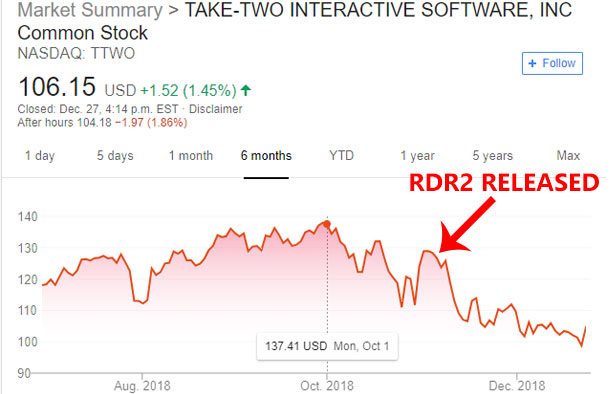 You can even see the spike around the end of October/start of November when RDR2 released. But, that still wasn’t enough to keep them from dropping with everyone else.

It’s not limited to only the gaming market either, it extends to all corners of tech and even reaches into other markets. You could call it a daisy-chain type of effect caused by a bear market, but again, I’m not an economist nor have I ever claimed to be. 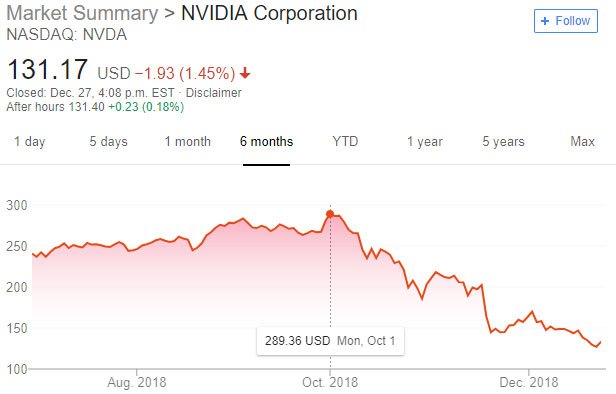 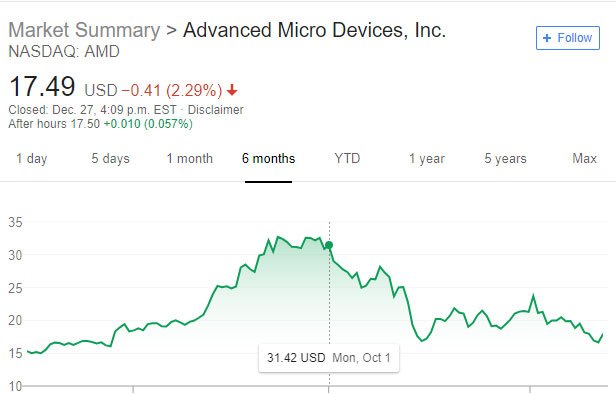 They look pretty similar, don’t they?

Even larger (and completely unrelated to gaming) markets like WTI oil have dropped during the same period. Here’s a chart for WTI (West Texas Intermediate) Oil prices, take note of the drop beginning at the 10/3/2018 mark (updated: 12/27/2018).

What does this all mean? Well, I’m simply not qualified to speculate that much. I’m just here to report what I’ve been seeing as it’s contradictory to what we’ve been told by the biggest Tech Tubers.

Long story short, drops from companies like EA, Ubisoft, etc, have all been used as click bait and nothing more. Either that or the source reporting on it didn’t do enough research to see the bigger picture. Whichever it is, we’ve all been fed incorrect information about these drops for some time now. Not good.

But… I guess that’s just what happens when everyone is striving to be first instead of correct. Had these “Tech Tubers” actually done a bit of research before blasting out a dozen different clickbait videos, maybe they would have been giving people ACCURATE information instead of blatantly incorrect interpretations? Maybe? But, maybe that’s too much to ask and maybe posting clickbait for views is more important than providing reliable and objective information. Who knows.

Feel free to leave your own interpretation below. You can also post links from imgur and other image sharing sites of drops you’ve noticed.