HDMI vs DisplayPort vs DVI vs VGA – What’s the difference?
3 Comments

Not sure what the difference is between those different display connections on the back of your new monitor? Don’t know if you should use HDMI vs DisplayPort for your new 4K monitor? In that case, let’s take a minute to quickly learn what makes all of these ports different and which one is the best to use.

When you’re comparing connections like HDMI vs DisplayPort, it boils down to what you have on hand and what your display is capable of. Sometimes, you can use any connection, but other times there’s only one good choice. More often than not, DisplayPort is the best choice and it’s what you should use if your hardware supports it. However, if you can’t use DisplayPort then HDMI should be your next choice.

By the end of this post, you’re going to know exactly what the limitations are on the various display connections, when to use them, and why one is consistently better than the others.

As always, if you have any questions feel free to ask me in the comment section!

There will be some reoccurring abbreviations throughout this post that you may or may not be familiar with already. Because I don’t want to confuse anyone with technical jargon, let’s go over some of those abbreviations before we get ahead of ourselves. 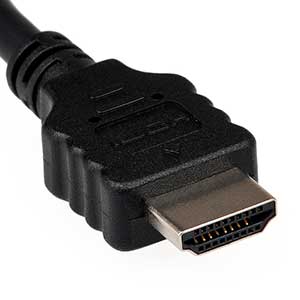 First up we have HDMI. Not only is HDMI the most commonly used connection that can be found on any modern display or graphics card, but it’s also the most versatile.

There are multiple versions of HDMI, from the old 1.0 to the newer 2.0, but the most common of these is HDMI version 1.4.

HDMI 2.1 adds dynamic HDR and 120Hz support for both 4K and 8K. However, to take advantage of the higher refresh rates in 4K and 8K, you’ll need to not only find a TV or monitor equipped with USB 2.1, but grab yourself a new 48G cable to boot. HDMI 2.1 isn’t something you should concern yourself with too much just yet, it’ll be a while until it’s adopted on a large scale. 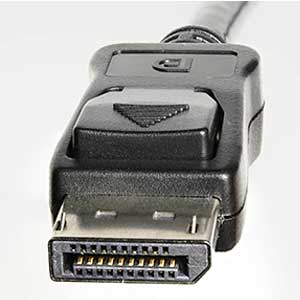 DisplayPort connections are almost solely found on computer monitors, but there are also some rare TVs that will come equipped with it. DP 1.2 is required if you’re running a monitor equipped with Nvidia G-sync – as well as an Nvidia graphics card – if you want to actually to reap the benefits of G-sync. Luckily, almost all modern monitors come with a DisplayPort and higher-end graphics cards also come with DisplayPort.

On certain monitors, DisplayPort 1.2 and up can be used to do what’s known as “daisy-chaining” which is effectively connecting multiple monitors to your laptop or desktop using only a single connection to the source and then connecting the rest of the monitors together; this is much more preferable than having 4 cables running to your PC if you’re a cable management nerd like I am. 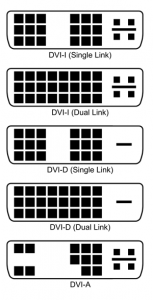 DVI connections are some of the oldest still being used today. First seen in 1999, these ports were once a revolutionary way to connect your desktop to your monitor. Fast forward to 2018, there’s not been a huge reason to use DVI connections since the advent of HDMI and DP.

There are multiple formats of DVI cables but the most common forms are DVI-D and DVI-I. There’s one more format as well, namely DVI-A; the A stands for analog and these connections are pretty uncommon to see unless you have a really old monitor/GPU.

Expanding on that further, there are also single-link and dual-link versions of both DVI-I and DVI-D. They can be easily told apart by the number of pins, single-link connections will have a gap in the middle with no pins or holes and dual-link will have pins/holes from end to end.

There are other differences between DVI-I and DVI-D that should also be noted. Like I just mentioned, DVI-I connections have 4 extra pins than DVI-D, these extra pins allow DVI-I to not only carry digital signals but analog signals as well. For most people, DVI-I is no different than DVI-D, but for some, it means running your old CRT monitor (for whatever reason) on a modern connection with the proper adapter. 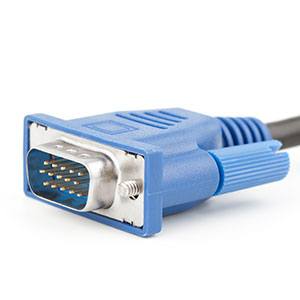 Safe to say, VGA is slowly going extinct. However, many modern monitors still come with VGA connections to this day so they’re still relevant, somehow.

VGA connections have no problem supporting 1080p 60Hz, but anything higher is pretty much out of the question. Unless you’re using an extremely long VGA cable, the visual difference isn’t going to be noticeable between it and say a DVI-D connection. However, due to the nature DVI, excessively long cables can cause signal degradation which in turn can produce a slightly lower quality image in comparison.

I can’t imagine it’ll be too much longer before this old dinosaur has gone completely extinct.

In conclusion, we’ve determined that HDMI and DisplayPort cables are your best options for high resolutions (4K+) and high refresh rates (144Hz+), while dual-link DVI cables will work great for 1080p up to 144Hz or even 1440p at 60Hz. We’ve also determined that VGA cables are very old and probably aren’t going to be around for much longer.

Chances are, your best bet is going to be using the cables that come included with your GPU and monitor/TV. The manufacturer knows the limitations and requirements of their product and they’re usually going to give you the right cable to fully support your display.

It’s also worth noting that buying the most expensive “gold-plated” HDMI or DisplayPort cables probably won’t increase image quality compared to a cheap one, not by a noticeable amount if nothing else. So, just avoid that altogether.

What’s your preferred connection? Let me know in the comment section!

I have a problem with my monitor and I would like to know whether it might be related with the type of connection between my desktop and the monitor.

I have a fresh new desktop with Windows 10 pre-installed and an old but good monitor (BenQ — purchased 8 years back).

My Display adapter is Intel HD Graphics 630 with an updated driver. My monitor is connected to the new PC with simple VGA cable while the PC has also a HDMI socket. But this old monitor hasn’t got any HDMI connection. It has one another DVI plug and my new PC hasn’t got any DVI outlet but my older PC had a DVI and I used to connect this monitor to the DVI outlet in my older PC.

I have good news, I believe what you’re seeing is Windows 10’s default power management. I’m assuming you’re running on the “balanced” power plan which will turn your display off after 10-minutes of inactivity by default.

You can change/alter your power plan settings within the Control Panel, but the easiest way to find it will be clicking the Start button and starting to type “power plan”. Doing that should give you a “best match” of “Choose a power plan”, clicking that option will get you where you need to be. From there, you can either click “Change plan settings” beside your currently enabled plan, or you can toggle to “high performance” which might be more ideal.

I hope that helps!