When it comes to prebuilt gaming desktops, they usually fall short and end up costing you way more than it would have to build yourself. But this isn't always the case like we've seen after a review of the iBUYPOWER Ultra AM900Z.

The AM900Z isn't entirely perfect, no prebuilt gaming desktop is, but it's still a pretty good bargain. If you want to avoid building your own gaming PC, this might be an option to consider.

iBUYPOWER's Ultra AM900Z gaming desktop is a good choice if you don't want to build your own but you still want strong components. The B250 chipset isn't the greatest choice for a build like this, but it will still get the job done.

iBUYPOWER's Ultra AM900Z gaming desktop is a good choice if you don't want to build your own, but you still want strong components. But, you'll have to make some sacrifices. 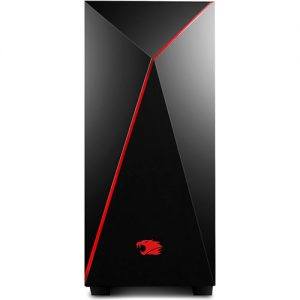 Outside of the generic power supply, we've all come to expect in a prebuilt desktop, the worst part about this build is the motherboard. No, it's not a bad motherboard, it's just the wrong chipset in my opinion. Since this desktop is running an unlocked processor like the i7 7700K that can be overclocked, it would make sense to include a motherboard on the Z270 chipset that also supports overclocking. But instead, iBUYPOWER decided to give you a motherboard running the B250 chipset for whatever reason...

That means, if you want to overclock the i7 7700K in this build, you'll need to upgrade the motherboard.

The power supply is your generic 600W, I'd suggest replacing it sooner than later, but that's up to you. It's not great to have a generic supply in your build, but it's something to expect in most prebuilt desktops.

Everything else in this build is excellent. From the i7 7700K to the GTX 1070 - you would be hard pressed to build this same setup for the same price. After putting together roughly the same components individually at Amazon, including Windows 10, I came up with about $1410 before taxes.

For comparison against one of my builds, the closest one would be my $1200 build with its included R5 1600, GTX 1070 and 16GB of RAM. The one major difference is the AM900Z runs a slightly stronger processor and comes set up and ready to turn on right out-of-the-box.

This build will perform just like you would expect it to. It'll completely storm through games in 1080p and will have little to no issues handling them in 1440p as well. 4K is a bit too much for this build if we're talking about brand new AAA games on ultra settings, but it can handle 4K in older titles or those that aren't so graphically intensive. 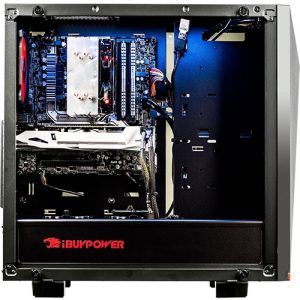 The components used are surprising to see at this level, to say the least. More often than not, a prebuilt desktop in this range will not include an i7 7700K and a GTX 1070, more like an i7 7700 and a 3GB or 6GB GTX 1060 at best. That's to say; this is an excellent value desktop.

One thing that held this build back from getting a better rating was the motherboard selection. Since iBUYPOWER decided to choose a B250 chipset motherboard for the build, I had to dock about 30 points from the CPU/Mobo ranking. This score isn't reflective of the CPU, but entirely the motherboard.

I'm not going to bash the power supply a whole bunch here, but I just want to mention again that it's somewhat low-quality. If you end up getting this desktop, definitely make sure to replace the PSU sooner than later - go for a nice fully modular unit and you'll not only increase the reliability of your PSU, but you'll also have options for cleaner cable management. An EVGA 550 B3 would work great.

The rest of the components in the Ultra AM900Z are quite decent. The GTX 1070 + i7 7700K + 16GB RAM specs will ensure maximum performance in 1080p will tackling 1440p with no problems. This build will also work great for streaming on Twitch or other platforms.

The overall design of the AM900Z gives me nothing to complain about. The cable management is pretty okay, the openness of the interior is good and allows for good airflow, and the RGB lights are decent.

Turning to the case, it's not one I've ever had any experience with before, but it seems pretty good for a generic mid-tower ATX case. It's made by iBUYPOWER, and I'm quite sure it's only used on their builds. That said, it doesn't give me much to complain about. I mean, there are lots of things it could have, like rubber grommets for cabling routes, an open front for better airflow, and more room for fans. But it's still pretty decent. 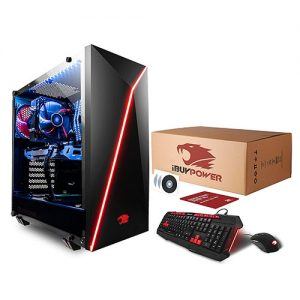 The remote-controlled RGB lighting is somewhat of a niche addition to the AM900Z, but it sure adds to the uniqueness of this build. The remote doesn't work the best at all times, sometimes requiring one or two extra button presses to register, but like the case it's passable. The closer you hold it to the case, the higher the chances of it working on the first press. Otherwise, the colors are vivid enough and definitely don't look bad if you like RGB lighting.

All-in-all, the design and build quality of iBUYPOWER's AM900Z gaming desktop didn't give me a whole lot to complain about - definitely not as much as I had expected.

Most prebuilt gaming desktops will fall short; whether that's concerning price vs. performance, or simply by offering you old/bad hardware. But, not all as is the case with the iBUYPOWER Ultra AM900Z gaming desktop. 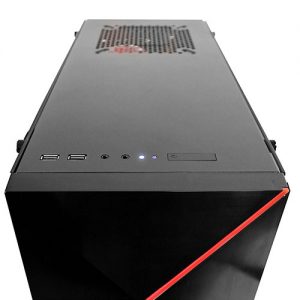 It's not entirely perfect, but it's still an awesome option if you're unsure about building your own PC, but you still want something with strong components. The AM900Z definitely delivers on strong components, just keep in mind the weak power supply that should be upgraded sooner than later. The included GTX 1070, i7 7700K, and 16GB of RAM will ensure amazing 1080p and 1440p gaming performance. This build will even work great for content creators and/or streamers.

The design, build quality, and cable management are all above what I originally anticipated, and I'm almost a little shocked. Yes, there's definitely room for improvement in a lot of areas, but it's not as noticeable like with a lot of other prebuilt desktops.

All-in-all, if you're considering buying the iBUYPOWER AM900Z gaming PC, you can rest easy knowing you're getting a pretty good deal at the current price. But, if you want to overclock your PC and get into the enthusiast end of PC gaming, this isn't the build for you. You'll have to upgrade both the motherboard and power supply just to support overclocking. By the time you've done that you've spent more than you would have on your own high-end gaming PC build.

Get Yours!
Tap Here
To Get Yours!
0 0 votes
Article Rating

can this PC run a Ultrawide monitor & if so what size or which one would run best or good with it ?

Yes it can but it’s out of stock. These are good ultrawide monitors : https://pcgamehaven.com/best-ultrawide-monitor/

Looking to add wireless adapter for VR headset. Is there available PCIE slot? It appears to be covered by the video card.

if your not going to overclock the cpu is there any other reason the motherboard would need to be upgraded?

Nope! Wanting to OC the CPU would be the only reason to upgrade the mobo.

And what if you want to upgrade the cpu ? Also, have you notice any voltage switch on the PSU ?