Post Scriptum – The Bloody Seventh is a squad-based WW2 FPS/simulation with a heavy focus on teamwork, communication, and historical accuracy. It’s published by Offworld Industries (the same team behind Squad) and is being developed by Periscope Games. 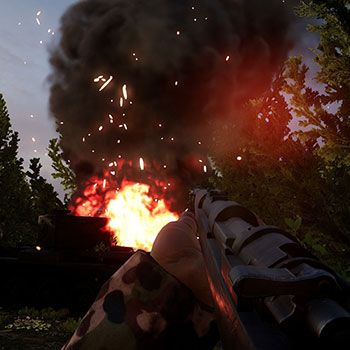 The large-scale 40v40 battles are reminiscent of Squad gameplay but in a much different setting. The WW2 backdrop really changes the dynamics of gameplay in Post Scriptum when compared to Squad. Most players will be equipped with slow-firing rifles rather than automatics which are fairly limited on the field of battle – as it would have been during most WW2-era engagements. The addition of proper tanks (like the Panzer IV, Cromwell, and Stuart) adds another level of combat that increases the need for effective usage of anti-armor options. Unlike in Squad, when armor is destroyed their ammo dump will subsequently explode which adds another level of immersion and detail.

Right now, performance isn’t great and there’s still a lot of optimization to be done, but it’s not terrible at the same time. Hitting a consistent 60fps is a bit of a challenge with mid-range hardware and even running a high-end GPU like the GTX 1080 will push it hard. Expect to run Post Scriptum around 40-50fps (or less) unless you have a complete beast of a PC.

All-in-all, from what I’ve played of Post Scriptum, it could easily be called a “WW2 Squad” because that’s effectively what it is. The UI is very similar, tactical options are similar (but not the same), and the graphics are also very similar. But, that’s not a bad thing by any means as Squad is easily one of, if not the best large-scale FPS on the market – once Post Scriptum is fully released I feel it’ll give Squad a lot of competition.