This is an old model and is no longer sold. See the review of the new GXiVR8020A here!

A new model of this gaming desktop has been released with more powerful components, check it out here.
Get Yours!

Finding a good prebuilt PC for less than $1000 is a really hard thing to do, but CYBERPOWERPC has made it a little easier with their Gamer Xtreme VR GXiVR8020A gaming desktop. Generally speaking, most prebuilt desktops geared towards gaming within the same price range are going to be using outdated or completely unbalanced components, but that's not the case with the Xtreme VR.

Prebuilt gaming desktops can definitely save you time, but it's extremely rare for them to also save you money like the GXiVR8020A does. Considering it comes assembled, includes a copy of Windows 10, a low-grade KB+M combo and then you tack on an i5 + an RX 480... That's pretty hard to do for less than $700 building it yourself... if not completely impossible!

This desktop is perfectly suited for 60fps 1080p gaming. Most new AAA titles are going to run absolutely amazingly on high settings or better while putting out a solid 60fps or more. Although the components used might change based on availability, this build will always have the same core setup. 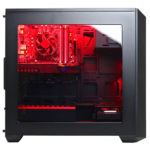 Cooler Master's MasterBox 5 is a really great case to see in a build at this level, not only is it made of high-quality materials, but it offers great expandability and cooling options.

The motherboard used is most commonly a B150 Bazooka from MSI, which is a great mATX board assuming you weren't hoping to eventually add another RX 480 - not enough ports. But, aside from that, it has great integrated 7.1 audio, a good built-in ethernet controller, 4x DIMMs for RAM, and lots of SATA ports for storage expansion.

The i5 6402p is a rather obscure CPU in the sense that you don't really see it outside of prebuilt PCs, but it's a very solid processor that's basically an i5 6400. Like I said, it's definitely an alright processor, but keep in mind that you will have the option to upgrade it down the line. The next line of Intel processors dubbed "Kaby Lake" will use the same socket as the current Skylake line of CPUs, so that means you can upgrade the i5 6402p to next year's line of CPUs. 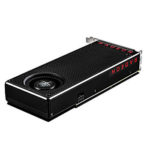 The graphics card used is an 4GB RX 480 from AMD and the most common model to see in this desktop is one from XFX. The RX 480 is on par with Nvidia's GTX 1060 for 1080p performance in DirectX 11, but it actually pulls ahead in DirectX 12 - you could call the RX 480 the more "futureproof" card at this time if you wanted to. If VR is what you're aiming for, the RX 480 will give you an awesome experience with either the Rift or Vive. Although it is a reference-based card, it's a great deal either way.

Storage levels in this build are relatively standard for what you would want to see at this price-point, but you could easily add your own SSD or another HDD if you feel restricted with only 1TB on a 7200RPM Toshiba HDD.

8GB of RAM is generally the minimum that you want to see in any gaming PC, and that's exactly what the GXiVR8020A comes with. The brand isn't one that I'm familiar with, but as far as I can tell it's really decent as far as 2133 MHz RAM goes.

The power supply is the biggest downside to this entire build, although it'll work for the time being, this is definitely something that I would suggest upgrading to a higher quality option before too long. It's not that the PSU will definitely fail, but it's something you can avoid almost entirely with a simple upgrade so it makes sense to do it.

Windows 10 is included with this desktop, which is great, you're also getting a USB-based WiFi adapter in the mix and a decent keyboard + mouse combo. Basically, all you're really missing is a monitor. 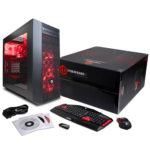 Overall, the look & feel of the GXiVR8020A nails that of a quality gaming PC. The cable management is on-point and the red LED accents really bring the whole thing together. There are still lots of fan mounting positions if you wanted to add more, and changing the case's color accent is as simple as changing the fans.

The Cooler Master MasterBox 5 is a great looking case in my opinion, and it's really awesome as far as cooling options as well. But, with an mATX motherboard mounted inside of it definitely looks a little bare. Something else to note is that you could upgrade to liquid cooling very easily with this case, not that you would really need it.

The included keyboard & mouse aren't the highest quality components you could get by any means, but they're definitely an alright looking set that blends well with the rest of everything included.

It's usually really hard to find a good prebuilt gaming desktop for anywhere near $700, let alone for just under, but CYBERPOWERPC's Gamer Xtreme VR GXiVR8020A offers up a lot of performance and value for what could be considered an amazing price.

My only gripe, like with 99.9% of prebuilt PCs, is the power supply. I would definitely suggest upgrading the PSU sooner than later, but it'll work well enough for now.

All-in-all, if you're currently on the fence about picking up CYBERPOWERPC's Gamer Xtreme VR GXiVR8020A, I would suggest pulling the trigger for sure. Like I said before, it's pretty rare to actually save money by buying a prebuilt gaming PC, but this one definitely does just that. 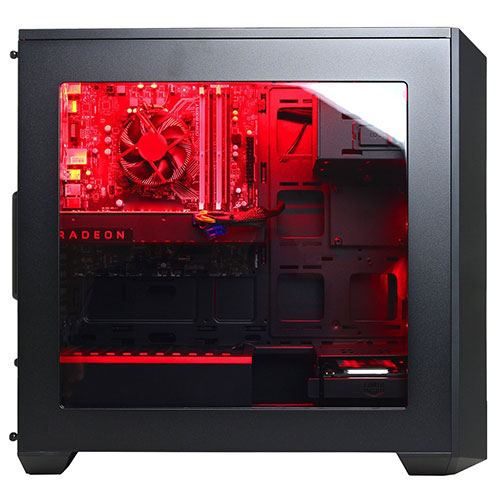 Do you happen to have a recommendation for an upgraded PSU?

A supply like the EVGA 550 B3 would be perfect.

Hi Branton! Great site! I use to build gaming PC’s 15 years ago and boy…. things have changed. Learning basically from scratch and trying to catchup as I have a 6yr old who wants in on PC gaming. Just a quick question.. is this system still relevant or has CyberPower released something better in the same range? Were looking for a budget system we can get into quickly and upgrade down the road. A great way for my son to learn how it all works and do is own research and upgrades. Thanks for the great site! Keep it up!

Does that… Does that say a 1 GB hard drive? Or am I missing something?

Haha, yeah, it definitely said a 1GB HDD under the specs. Just a typo and should have been 1TB, my bad 🙂