Epic Games to launch their own game store
0 Comments

Epic Games, makers of Fortnite and the Unreal Engine, have recently unveiled plans to launch their own game store. Their plan? To compete against the likes of Valve and Google. The most appealing feature should be the lower commission they’ll take from developers.

Compared to Steam’s 30-35% commission, Epic Games only plans on taking a cut of 12%. This means developers get to keep more of their money which can be used to make better games while supporting them for longer. This also means that indie studios could charge less for their games will still earning a bigger profit than they would through Steam. 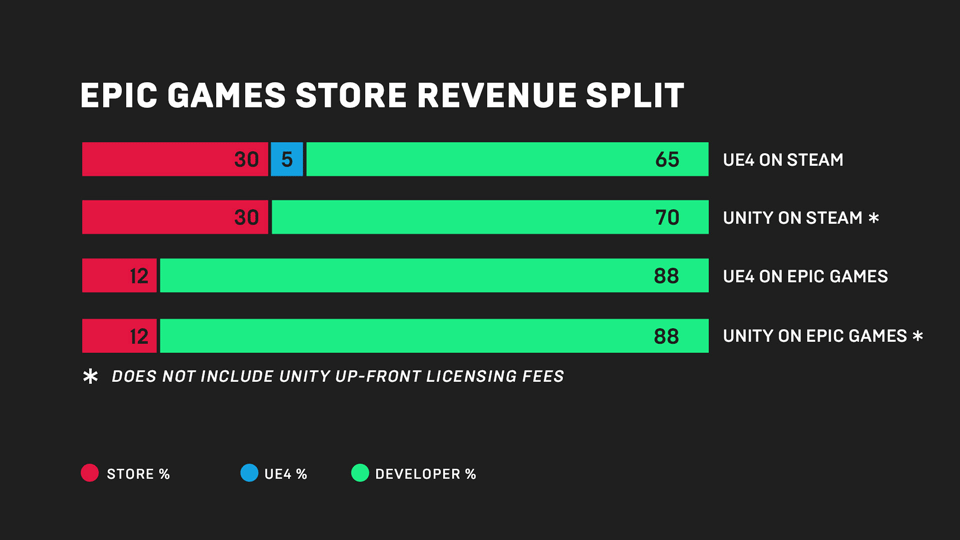 To put it into perspective, if you look at an indie game like Rimworld that retails for $34.99 on Steam, Valve keeps about $10.49 out of that. In comparison, Epic Games would only take a cut of roughly $4.19 from that same $34.99 price tag.

That doesn’t sound like much until you consider that for 100,000 sales, the developer would be paying Epic Games $629,820 less than they would have to pay Valve to use Steam. Now, scale that up to 1,000,000 sales and you’re looking at a difference of over $6-million.

For a small indie developer, that’s massive and can enable more expensive features that might not have been possible before. For us gamers, that should translate into better, more refined indie games.

It’s even better if a developer uses the Unreal Engine because Epic Games will cover the 5% royalty out of their 12% commission. Meaning, that particular developer gets to keep yet another 5% to be invested into improving their game even further. That’s a pretty good deal if you ask me.

How can they do it?

Epic Games is no small fish. Thanks (in part) to the massive success of Fortnite, Epic have skyrocketed into being one of the biggest games companies out there. Their estimated value rivals that of “large” games companies like EA and Ubisoft while putting them closer to the leagues of Take Two.

With that all said, it’s no surprise to see Epic scaling their business into other parts of the gaming market.