Static Pressure vs Airflow Fans | Will Both Cool Your PC Equally Well?
5 Comments

Choosing the right fan for your PC will make a huge difference in how you maintain, and cool your PC overall. There are many different ways to cool your PC, it could fans or a liquid cooling system. For the most part, fans are the cheaper and most popular option. Liquid cooling systems are much more expensive. Now with fans, there are a variety of different fans you could utilize as they can serve different purposes on your PC.

Fans typically come in two different types of fans - static pressure fans or air flow fans. Choosing between static pressure fans and air flow fans can be hard, especially if you don’t understand their differences or where to use them. However, this choice doesn’t need to be complicated. So I'm going to help you on how you can affectively choose which fan is better for your needs!

What is an Airflow fan?

High airflow fans are exactly what they sound like -- they push as much air as they can as quickly as possible through your build using a fan. These are the more traditional fans. These airflow fans usually have bigger, curved blades and have a gap to keep the fan together. These fans move at a maximum RPM (Revolutions Per Minute), and the only factor that can change is the atmospheric pressure. 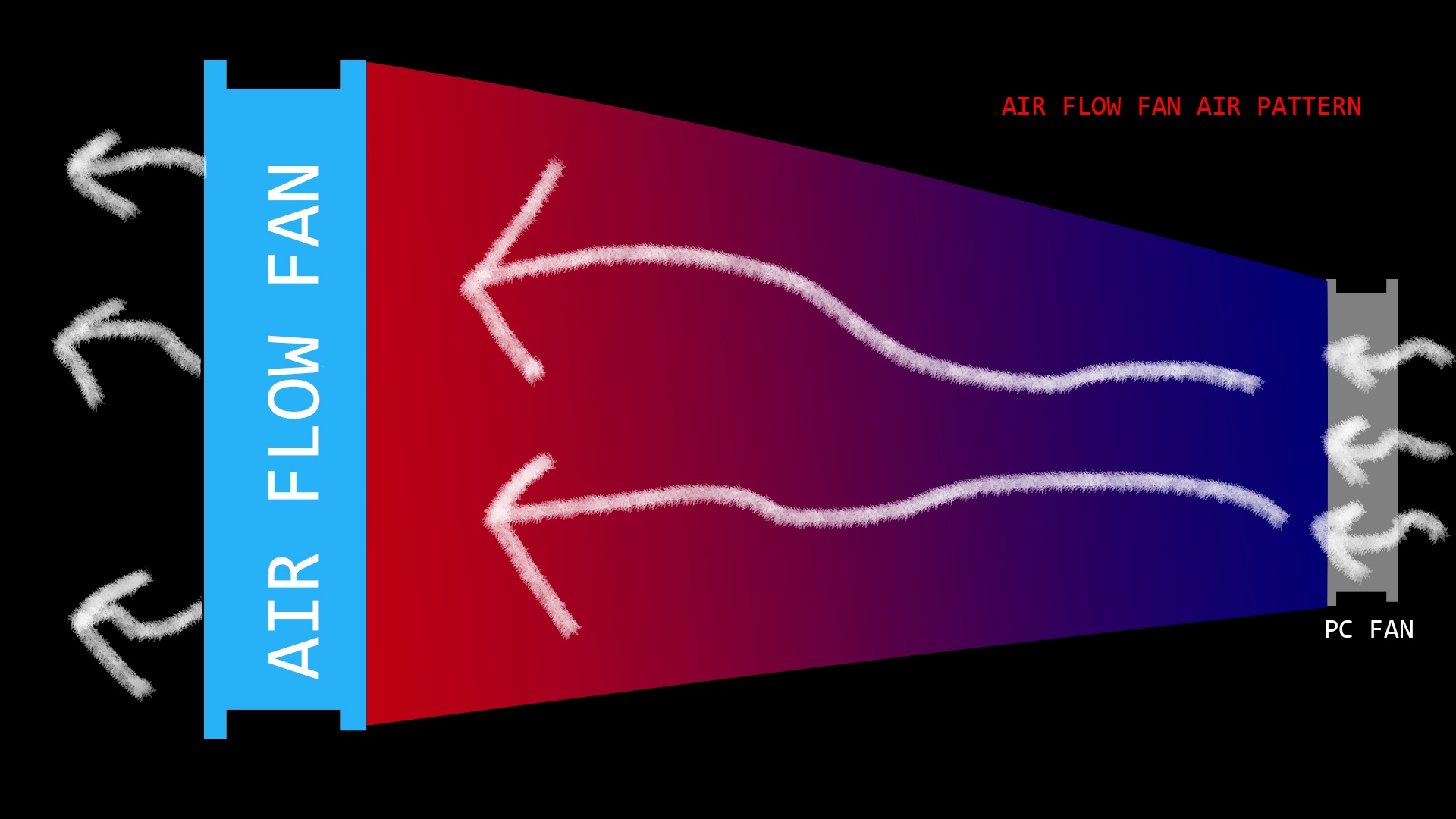 Airflow fans are very useful where there is no resistance, however if there is anything impeding your build, such as a tighter fit on a case, you may come into contact with some issues. Even more importantly, if your case has mesh inside of it or it comes into contact with dust, your airflow fan may create some future problems for you.

What is a Static Pressure fan? 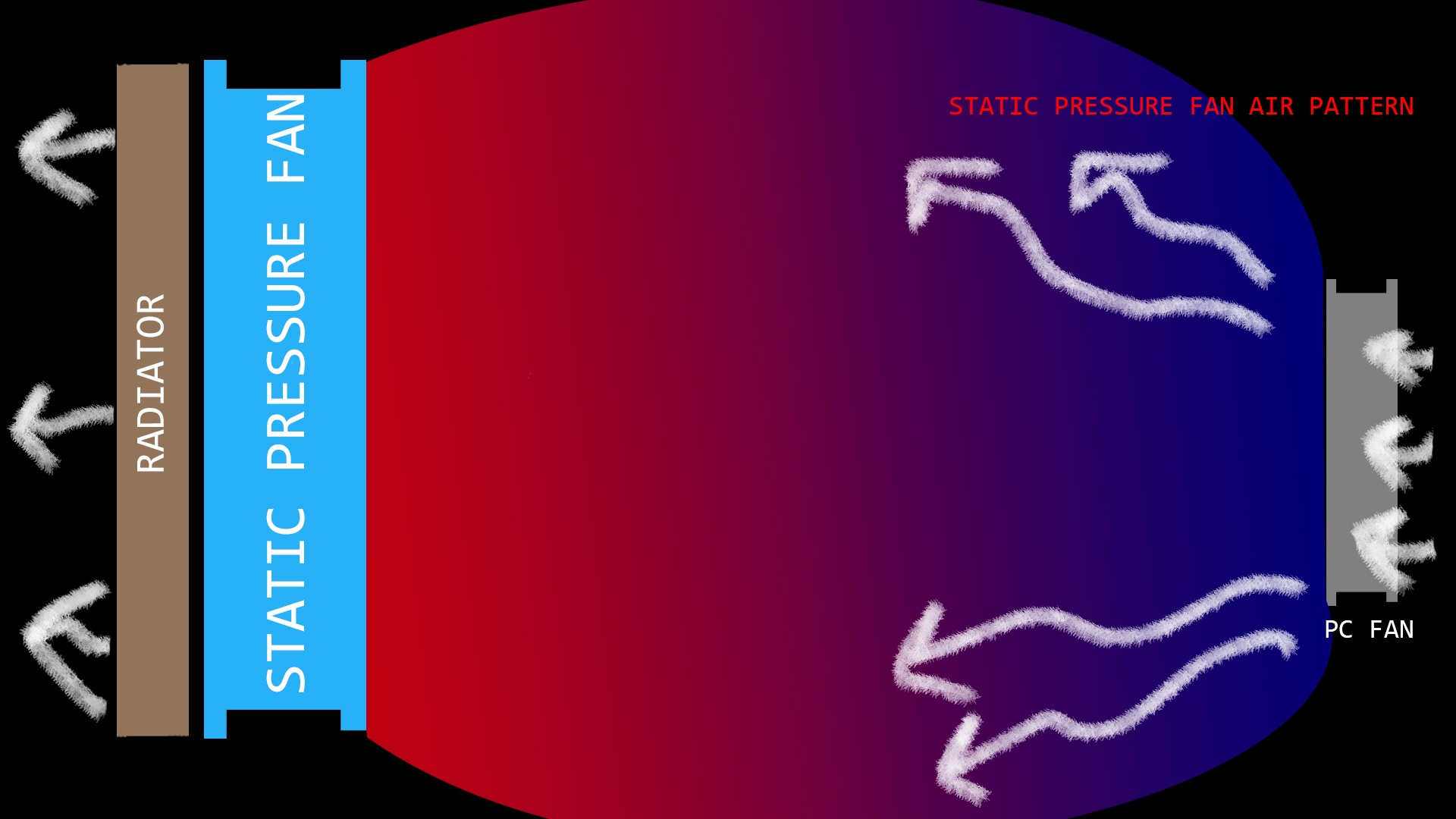 Static pressure fans are great for radiators and case meshes, and use resistance to push heat through your PC build. If there is anything impeding your airflow, such as blocking the air from going through the vent from behind, a static pressure fan will be far more efficient.

Static pressure fans are very good at creating negative or positive pressure, which pulls the air through the fan and forces it to move, even if there is something impeding it's way. It creates a vortex of air in an inverse or converse fashion, and moves the air through this pressure.

Differences of a Static Pressure Fan vs. Airflow Fan

There many different fan blade designs on the market, and picking the most efficient one may seem complicated. However, it doesn’t need to be. Fans should push the air past themselves, using the right angle in how it attaches to its bearing to really make that air flow. With static pressure fans vs airflow fans, the fan blade structure is the main difference between these types of fans. Static pressure fans come with wider blades, but the gaps between The main difference has a direct connection with how the fans are optimized, because the cooling system works differently. 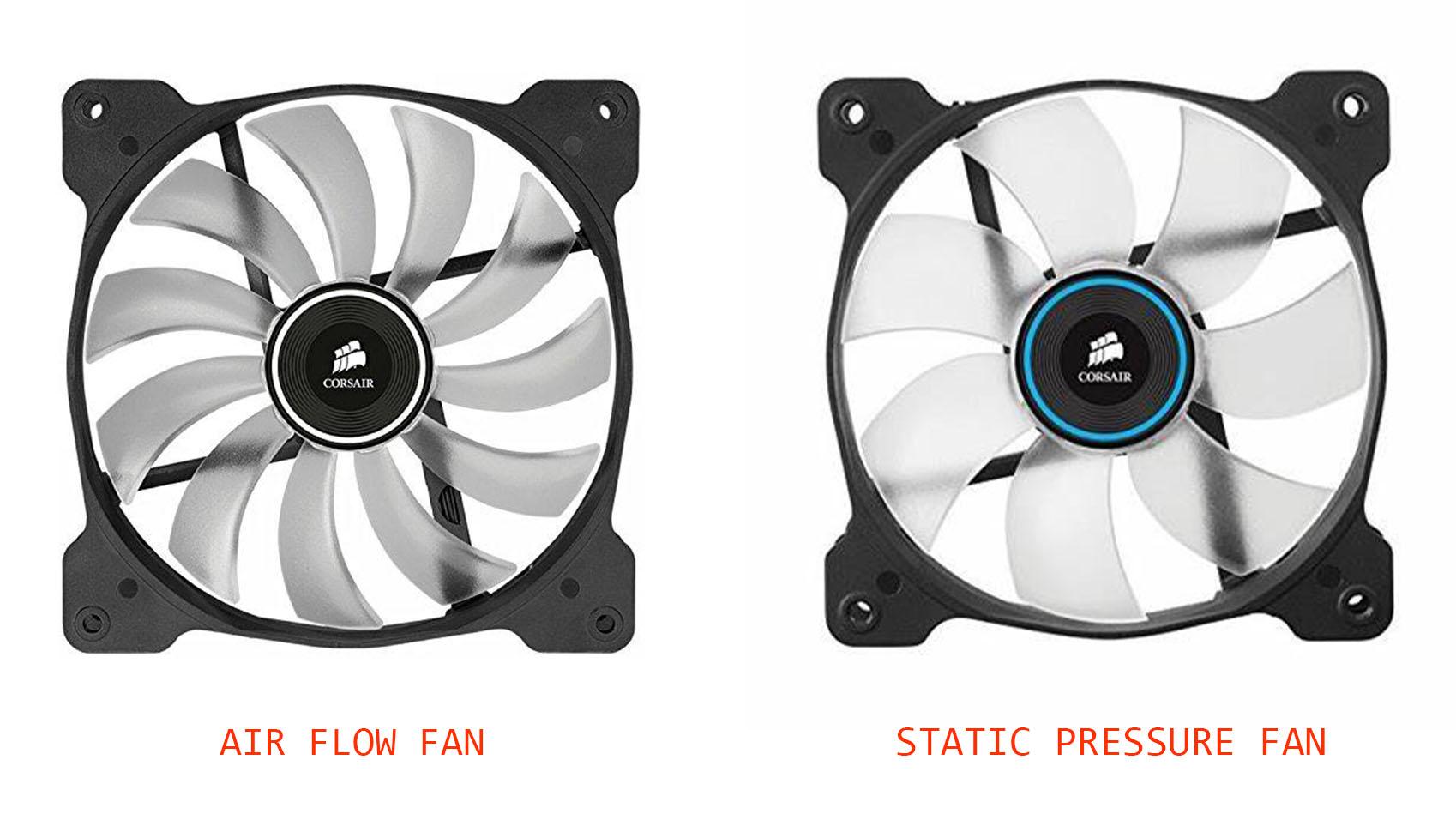 Air flow fans tend to have a smaller surface area blade, and therefore a wider gap between each blade. This is due to the fact that are more blades on an air flow fan. Remember, the whole point of these fans are to get as much air flow through the fans as it optimizes in RPM (Revolutions Per Minute). An incredibly efficient fan should sit at about a fifteen-degree angle on its bearing. This creates broad blades that simultaneously push forward while allowing the air behind it to be pulled into the fan.

Static pressure fans are designed with a blade that has a larger surface area and therefore smaller gap between the blades. This helps push air through radiators, case meshes, and dust filters. These high static pressure fans are built to tackle resistances with ease.  More pressure is applied on the outer parts of the fan and not the center like air flow fans. This lets air flow freely in the PC case.

Fan Placement in Your PC

You can integrate both fans into the PC with ease, it's all about where you place them. Remember, with air flow fans, make sure you have fans placed in open areas, and static pressure fans are placed next to areas that may have some restriction. Each fan is recommended in the following areas of your PC case: 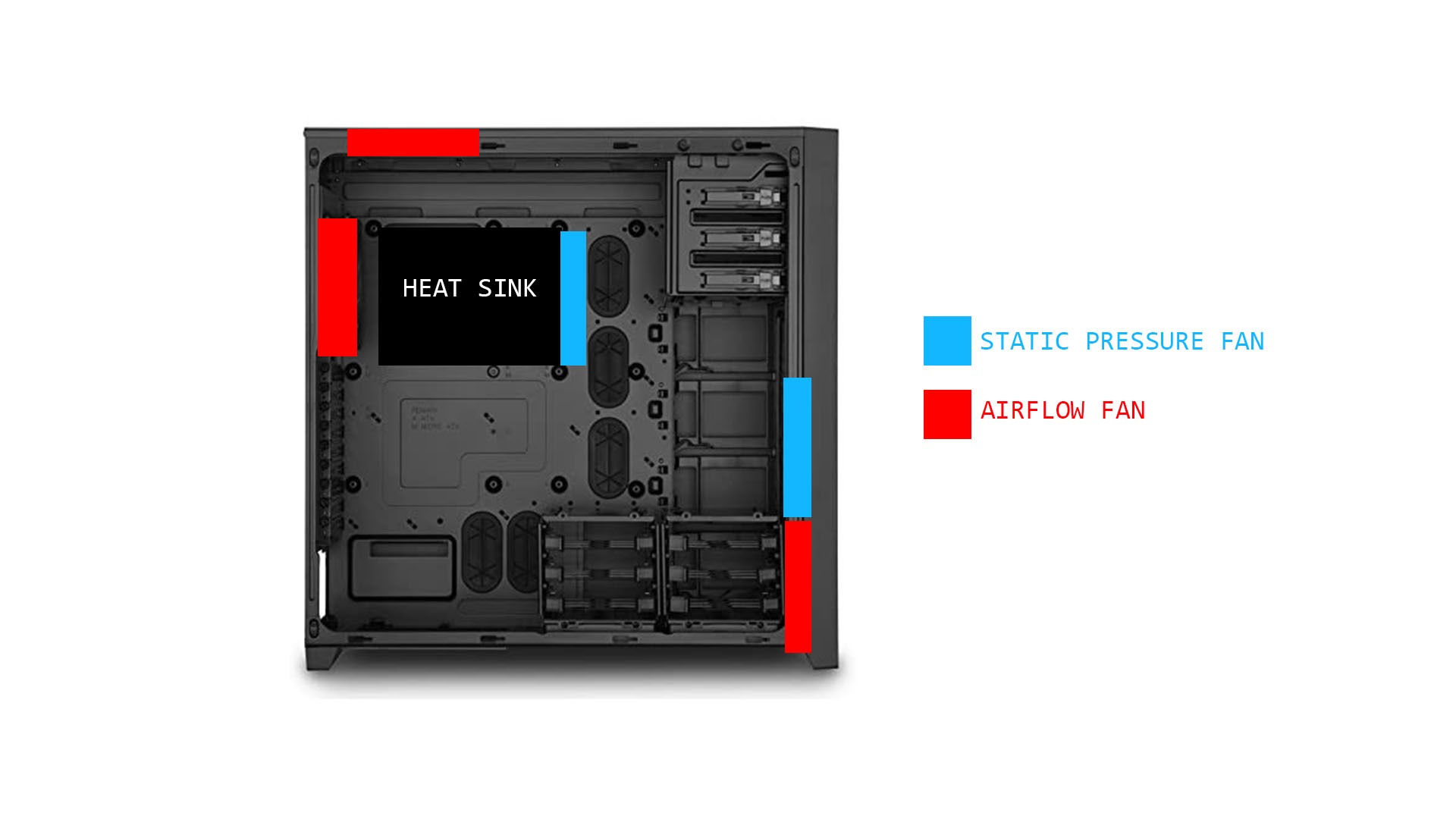 By focusing your attention to the RPMs, or revolutions per minute, the CFM, or the cubic feet for minute, and the quality of the bearings and blades as well as the airflow, you can make a more educated determination of where your fans should be placed. Fan case placements can vary between PC's, it just depends on the kind of parts you have inside your case. You want to optimize how well fans can cool certain parts. Just remember the types of fans you're using when placing it next to your components.

At the end of the day, you want to make sure that your PC case and components are properly cooled. Remember, static pressure fans are meant to be placed near obstructed areas, and air flow fans should be placed in more open areas. Both types of fans will determine the proper air flow of your PC. It's important to keep your air flow optimized because depending on the type of work you do, whether it be heavy gaming or editing, performance can be affected by how much air is able to be cycled through.

What is a high static pressure case fan?

What is a pressure optimized fan?

A pressure optimized fan is a fan that optimizes for a greater amount of air that is optimized pushed in a case. These high-pressure static fans have a larger blade design, fewer blades involved, and a smaller gap between the body and the fan of the blade.

Is a higher CFM better?

A fan's airflow is measured by CFM or cubic feet per minute. CFM determines the amount of air that a fan can cycle through in one minute time limit. Generally speaking, the higher CFM the better. But there are issues that can happen if there are hardware obstructions.

PC case fans matter as it keeps air flow properly cooling your PC. Having a cooling fan system allows your PC components to stay at safe temperatures and therefore prevents your PC from malfunctioning caused by overheating.

Which way does airflow go?

The general airflow direction is from front-to-back, and bottom-to-top in a PC.

But then the picture of a static pressure fan shows larger gaps between the blades than the airflow fan.

And the text has the nonsense sentence: “Static pressure fans come with wider blades, but the gaps between The main difference has a direct connection with how the fans are optimized, because the cooling system works differently.”

What is going on?

You need static pressure so the air can go through the gpu heatsink fins I would guess.

Thanks for the Great explanation…
STATIC PRESSURE FANS PLACEMENT:

Yet FRONT INTAKE in PC case in front of HDD cage is RED –> AIRFLOW FAN,
but should it be STATIC PRESSURE FAN as outlined above?