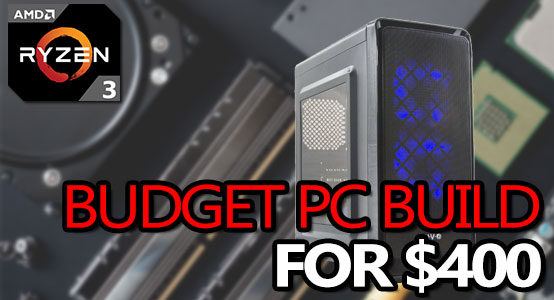 Looking to build yourself a PC using the new Ryzen 3 2200G so you can avoid the GPU shortage and wait for better prices while still gaming? Then this is the absolute best build for you! Coming in right around $400, you’re getting the R3 2200G, 8GB of DDR4 RAM and 1TB of storage!

The 2018 GPU shortage has hit us all hard, to the point where there simply aren’t enough graphics cards to go around and gamers like yourself have been sitting in wait seemingly forever! No more! With AMD’s new Ryzen APUs powered by integrated Vega graphics, gone are the days where a GPU was absolutely necessary for gaming!

That’s not to say the Vega 8 graphics stuffed inside of the R3 2200G will completely replace a dedicated graphics card, but it’ll definitely get you into gaming sooner than later!

Estimated
$399
At Amazon
Get This Build

Below you’ll find some suggested add-ons for this build, some I’ll mention more in-depth further down this page, but some are pretty self-explanatory like optical (DVD/CD) drives. Although not entirely necessary, optical drives can sometimes come in handy and I strongly recommended having one; if you have an old PC kicking around, it’s optical drive will more than likely work for you and you won’t need to buy a new one.

When you’re picking parts to build yourself a gaming PC there are lots of things to consider. For instance, do you plan on upgrading it in the future? Do you just want what you can get now, or do you want to eventually overclock your processor? Each path gives you a lot of new things to consider to effectively balance price with performance. But, why do all that when you could have me do it for you?!

Keep in mind that the price listed above is for the core components only, you will still need an operating system, and any other peripherals you don’t currently have.

Case: First up is the case and for this build I’ve chosen to use one of VIVO’s tried, tested, and true V06 models. It’s a great little mATX case with a lot of room for upgrades and a tiny price tag to boot. 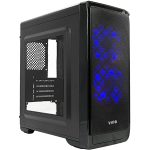 There are tons of other mATX cases that would work great with this build, so make sure you check out my post of the best mATX cases!

It comes with 2x 120mm fans which are lit by blue LED lights and both come preinstalled at the front of the case by default. This isn’t the ideal fan setup for this case however, to get the most out of it you should move one fan (either one) to the back of the case facing out so it can exhaust any hot air out while the remaining fan in the front can bring in new fresh air.

Motherboard: MSI’s B450M Pro-VDH micro-ATX mobo we’re using is one that’s definitely gone through the paces and has proven itself as a not only a reliable but more importantly worthwhile choice. 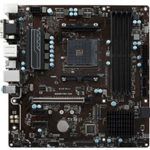 It doesn’t have all the fancy RGB lighting and such you might find on a higher-end mobo, but it does have ALL of the features we need for a build at this level and then some. We’re getting 4 DIMMs for RAM (allowing for easy upgrades), 4 SATA DATA ports, and a total of 8 USB ports including 4x USB 3.0 and 4x USB 2.0.

Processor: Like I just said, the processor used in this build isn’t a conventional CPU, instead it’s what AMD likes to refer to as an APU (Accelerated Processing Unit). Basically, it’s a GPU and CPU in one kind of like Intel does with the bulk of their processors. 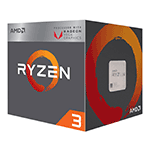 The R3 2200G is a 3.7GHz quad-core processor with integrated Vega 8 graphics. It comes with an AMD Wraith Stealth cooler and can be overclocked within reason. That said, if you want an aftermarket cooler then check out my post covering the best CPU coolers!

The biggest draw to the R3 2200G right now is the fact that it, as you may have assumed, does not require a graphics card to run games. All graphical rendering is handled by the processor which effectively gets you away from the insane prices caused by the 2018 GPU shortage.

In terms of raw processing power, the R3 2200G is very impressive and can easily throw punches with the more expensive Intel i3 8100 with only marginal differences in performance (assuming both are paired with the same GPU). It’s also blowing the Pentium G4560 out of the water which is a processor you might see used in other builds at this level.

There’s also the R5 2400G in the new lineup of APUs from AMD, however it’s quite a bit more expensive and the amount of performance you get in comparison isn’t always worth it. Check out this benchmark comparing the R3 2200G vs the R5 2400G so you can see what I mean.

Graphics: Handling the GPU-related tasks for this build is AMD’s Vega 8 which they’ve bundled into the R3 2200G. It’s not super powerful, but it does blow Intel’s integrated graphics out of the water and it will allow you to play games, even AAA games!

That being said, it’s not powerful enough to handle high frame rate gaming or really graphically demanding games. That’s to say, Kingdom Come: Deliverance would most definitely give this build a run for its money, but something more along the lines of CS:GO would run great.

Power Supply: EVGA’s 500W B1 is a fairly standard 80+ Bronze power supply; it’s definitely a good PSU, but there’s nothing fancy here like a modular design or RGB lighting. 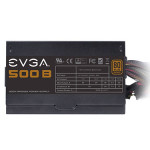 You might be thinking “But wait, isn’t 500W A LOT of power for this build?” And yes, absolutely. However, once you decide to add a GPU you’ll be thankful that you already have a 500W PSU because it’ll be one less thing to think about upgrading at the same time. Plus, everything will be setup and ready to go and you won’t have to worry about cable management again.

RAM: 8GB of DDR4 RAM is the absolute minimum that you want to game with in 2018, period. Well, unless you’re only playing old-school or pixel art games, I suppose. But, still, 8GB, minimum. 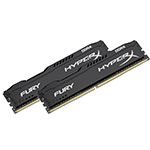 We’ve opted to use a dual channel pair of sticks from Kingston’s HyperX FURY lineup of DDR4 RAM. It’s clocking in at 2133MHz and will be more than enough for the time being. But, like everything else, there’s always room for improvement and running 16GB of RAM is undoubtedly better than running 8GB. Just something to think about.

Storage: Storage is a tough call, sometimes a smaller SSD is better than a 1TB HDD, but in this instance I decided to opt with a 7200RPM Western Digital Blue HDD. It won’t be as fast as an SSD, but it will give you way more storage space than an equivalently priced SSD would. 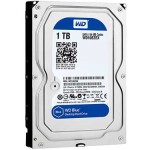 Wondering what the actual difference is? Then check out my post covering exactly what the differences are between and SSD vs an HDD.

When it comes to storage, you’re only ever limited by how many SATA ports you have open. With this build, you have a total of 4 SATA ports with only one being used by this drive; that leaves room for potentially 3 more SSDs or HDDs depending on what you see as fit. 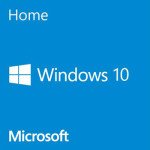 When it comes down to the operating system, there aren’t many choices. Either Windows 10, or a Linux-based OS like Ubuntu.

On one hand, Windows 10 will give you out-of-the-box compatibility with practically all games and programs. But, it does come with a price tag of around $100.

Linux, on the other hand, might not be compatible with all games or programs you want to use and you might have to figure out workarounds to get them working. For a price of $0, this might not be a bad option for some people.

So far, we’ve covered everything you’ll need for the tower of your desktop. What we haven’t covered is everything else you may or may not need, depending on what you have right now.

If this is the first PC you’ve ever owned, chances are you don’t have the other peripherals required for a desktop, like a monitor, a mouse, a keyboard, and some kind of audio (like speakers or a headset). There are tons of other things you could add on to really make this your build, but for the most part those 4 items are the “basics”.

Below, you’ll find some peripherals that I’ve hand-picked for this tier of build based on their price and performance relative to a budget set at this level.

Outside of these items, you could also check out the best chairs for gaming as your comfort level is directly tied to how much you’ll enjoy gaming sessions.

The motherboard in this build does not come with built-in WiFi – most don’t outside of the high-end builds. That being said, if you need to use WiFi then you’re also going to need a WiFi adapter.

External WiFi adapters work pretty good now and they can definitely be used for gaming without an issue, assuming you get a good one. These little adapters are usually a bit cheaper than internal options, and more convenient as they’re not taking up space inside of your case.

This budget build packs a lot of punch for such a low price. The R3 2200G is a surprisingly powerful processor that’s almost guaranteed to beat your expectations – as long as you’re not expecting 1080p ultra settings gaming at 60fps!

At the end of the day, this little build proves that you don’t need to spend insane amounts of money to get yourself into PC gaming. At least, not to build yourself a desktop capable of PC gaming. Depending on what you have, everything else might add up to almost the same cost of the build itself, so make sure you’re double-checking that!

As always, if you have any questions, feel free to leave them in the comment section and I’ll reply ASAP!

Get This Budget Build

Not the one for you?

Hello! I’m not a gamer, but, I need to build a pc with the Ryzen 3 2200g. I’m working from home 8hrs a day and only uses Google Chrome (about 10tabs opened), Skype, Slack, and PhotoShop at the same time. Though, I also want to install Garena. Is this build recommended for me? Thank you so much!

Can I use ddr3 ram instead of ddr4?

Can I add a graphics card to this?

Yes, If you are adding an RX 5 series graphics card you should also be able to crossfire it with the APU to get even greater performance. However, I would make sure to upgrade the CPU once you have added the GPU as any decent CPU and RAM upgrade will leave the CPU as the bottleneck. My upgrade path would be as follows;