What is a computer’s motherboard? Why is it important?
0 Comments

A computer’s motherboard is easily one of its most important parts. Without one, you won’t have anywhere to plug in your other hardware and your PC simply won’t be a PC. But, what exactly is a motherboard and why are they so important?

In this post, you’ll learn exactly that and more. By the end, you should have more than a good understanding of what a motherboard is.

Motherboards are often referred to by a whole slew of names like MBO, MOBO, mainboard, board, and sometimes even just “mb”. Personally, I usually use MOBO and that’s primarily what you’ll see used throughout this article.

What is a motherboard?

At its core, a motherboard is basically the command center of a computer. It serves as the centerpiece where almost every other component routes through. A MOBO also works to regulate communication between pieces of hardware; like your CPU and RAM, or pretty much everything else.

Motherboards are made by combining multiple other parts onto a single printed circuit board (PCB). But, you really only need to know a few. Primarily, the parts of a motherboard used when assembling a desktop. In the following diagram, I’ve outlined some of the more important parts that you should know. 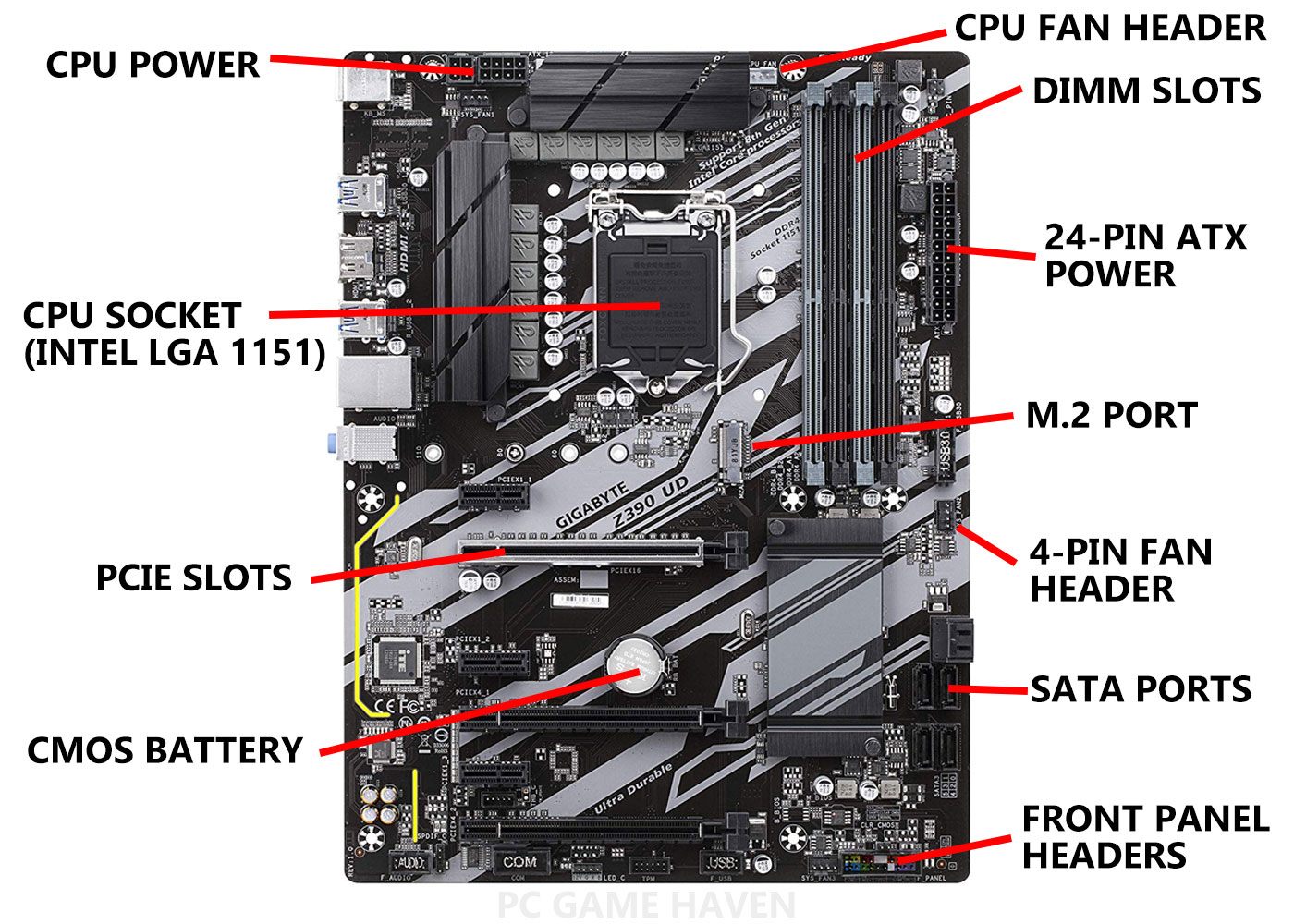 The 2 primary CPU manufacturers, AMD and Intel, both have their own proprietary CPU sockets. This means that different motherboards could be equipped with different socket-types. For desktops, AMD is currently using the AM4 and TR4 sockets and Intel is primarily using LGA 1151.

Beyond sockets, there are also various motherboard chipsets; these chipsets determine the features a MOBO can support, like CPU overclocking as an example. Like sockets, both Intel and AMD have their own proprietary chipsets. Without the appropriate chipset for your CPU, you might be either overspending or limiting the number of features you can take advantage of. Since this is not ideal, make sure your MOBO’s chipset matches both your CPU and expansion needs.

Motherboards also control how much expansion a desktop can accept, at least to a certain degree. Since motherboards can possess a varying array of ports, headers, and connections, it’s uncommon for 2 different boards to offer the exact same amount of expandability. Some boards might have more fan headers, some might have more options for storage expansion, some might offer better/higher-quality audio options, and so on. This is why it’s important to triple-check that your MOBO supports all of the features you’ll need.

What a motherboard isn’t, is pure hardware. There’s also a firmware side to a motherboard that most will know as either a BIOS or a UEFI. Whatever you refer to it as, a BIOS is basically your motherboard’s built-in operating system. It allows the manufacturer to roll out motherboard-specific patches and also allows the user to tweak various system settings and even overclock the processor and RAM.

There are 4 primary sizes of a computer motherboard. In order of size, they’re Mini-ITX, Micro-ATX (mATX), ATX, and Extended-ATX (EATX). Out of those 4, only 2 of them are common to see used in the majority of general use and gaming desktops, mATX, and ATX. Mini-ITX is usually used for tiny HTPC-style desktops and EATX is usually reserved for behemoth workstations. Here you can check out our best mini ITX motherboard lineup.

How to pick the right motherboard

Picking the right motherboard is crucial. Not only could you potentially end up with the wrong chipset or socket, but you could also be missing features that you wanted to use. Since that just sounds more annoying than anything, let’s take a look at how to pick the right motherboard.

You want to make sure all of these boxes are ticked:

Being able to cross those 5 considerations off of your list will go a long way to making sure that you’re picking the right motherboard. If you’re unsure exactly what you need for your build, feel free to post your specs below and I’ll try my best to assist.

Motherboards are easily one of the most important parts of any desktop. They’re the conduit through which every other component communicates. But, that doesn’t mean you’ll have to spend your entire budget on one. As long as it’s compatible with every other component you’re using, that’s all you have to worry about. Unless you’re getting into serious overclocking, you won’t have to worry about having a super high-end board.

By now, I hope you’ve been able to gather a good idea about what a computer’s motherboard is, why they’re important, and even how to make sure that you’re picking the best option.